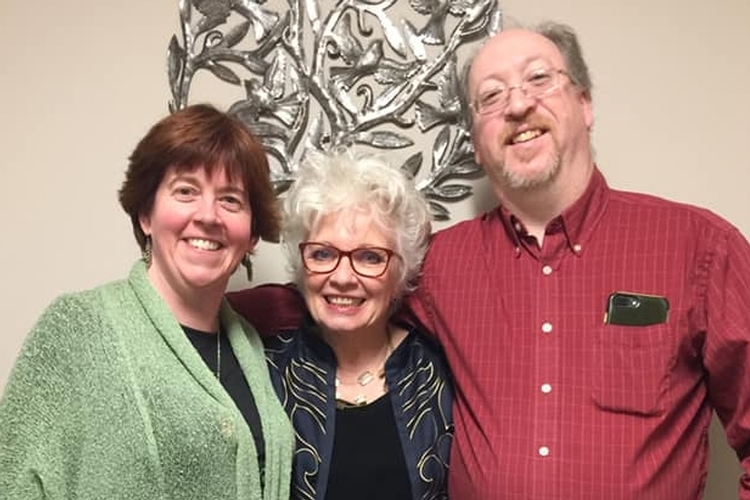 Pictured above is Cathy with Linda Howe and her husband Bob. Cathy recently celebrated the 20th Anniversary of the store.

Cathy Levine is the owner of Circles of Wisdom. Circles of Wisdom is a retail store offering books, music, crystals, gemstone jewelry, aromatherapy products, statuary, and more. Circles also offers workshops in subjects such as personal transformation, alternative healing, psychic development, spirituality, and other topics. Presenters are both local and national. Readings are also offered most days of the week.

How it all began
Cathy was never exposed to alternative spiritual ideas as a young child, and didn’t have any particular psychic gifts. It wasn’t even until after college that she had her first real tarot reading. The reader suggested she read Marianne Williamson’s book Return to Love, and that is what sparked her interest in spirituality. She became so consumed with her interest in books that she kept a spreadsheet of all the books she wanted to read. As the list grew, Cathy realized she would love to own a new age bookstore one day. At the time she was working as an actuary at an insurance company – very different from the environment she’s in now!

When visiting another psychic a few years later, mostly seeking relationship advice, she got another message - “I see you surrounded by books.” When Cathy drew a card on owning a metaphysical bookstore she got the Sun card. It represents the Source, Energy and the reader said one of the best cards for owning your own business. Cathy was delighted with the unexpected affirmation of her dream but still wasn’t very serious about making a change in her life anytime soon. She used to say to herself “when I’m 50”, then that became “when I’m 45”, “when I’m 40” and finally “OK, I’m doing this now”. After a series of synchronicities in finding the right place, she bought Circles of Wisdom in 1998 from the owner who started it. She was 32 years old at the time.

It only takes an instant to change a life, and she is touched by some of the changes that have happened in people through what has been offered at Circles.

Following her intuition, but not completely ready to take a huge leap, she switched to a 30-hour work week at her corporate job when she bought the store. It was a tough schedule, but Cathy was thrilled to be doing what she felt called to do. It took a few years of baby steps and learning to trust, but it’s been about 5 years now that Cathy has been at Circles full time. She’s finally recovered from the years of sleep deprivation and doesn’t have any regrets about the steps she’s taken. She’s learned that it’s not the money that makes you happy, and when you do what you love it is a lot easier to adjust to a simpler lifestyle.

Today, she enjoys promoting the workshops with presenters both near and far, and appreciates the time she gets to spend with these incredible people. For her it’s about community and bringing people together for the sharing of ideas. She likes to keep Circles of Wisdom as a welcoming place where people feel safe to come in and explore different paths. There is always so much that she wants to offer people; she doesn’t see there being a lack of exciting new programs to offer anytime in the near future. As more people are looking for answers in these difficult times, she hopes they will find Circles and feel comfortable to come in and browse the books, get a reading, or take a class.

It only takes an instant to change a life, and she is touched by some of the changes that have happened in people through what has been offered at Circles.