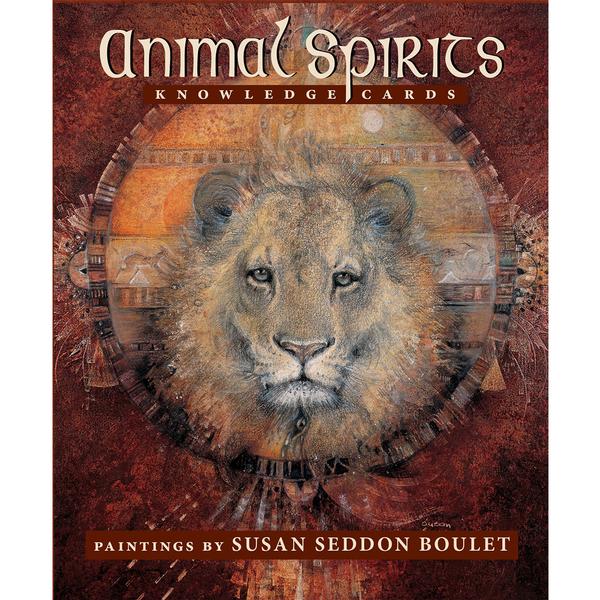 We currently have 1 in stock.

To the ancients, all things in nature had sacred or spiritual meaning.

The world was inhabited by the higher beings, who took the form of fantastical creatures that were part animal, part human, and exceedingly powerful. These beings are the spirit guides who lead the departed to the next life, heal the sick, and restore balance and harmony to a troubled world. The tribal healers knew the animal spirits well. They journeyed beyond the threshold of ordinary reality to invoke the power of these great beings.

The 48 paintings by Susan Seddon Boulet (American, b. Brazil, 1941-1997) reproduced in this deck resonate with ethereal energy and speak in the language of the soul. Each image is accompanied by a brief description of the animal's power and symbolism in various cultures.

Susan Seddon Boulet was born in Brazil in 1941 of English parents who had emigrated from South Africa. She grew up on a large citrus and cattle ranch enjoying a strong connection to nature and a rich fantasy life fed by folktales told by her father and the ranch hands. Encouraged by her father, she began drawing her first subjects were the ranch's cows and horses. Boulet never studied art formally. She said, in fact, that she never planned on becoming an artist--the vocation came to her as by accident. In 1967, she came to the United States, where she met and married Lawrence Boulet in 1969 their son Eric was born--an event Susan credited with freeing her creativity "[Eric] somehow freed the child in me; gave me permission to enjoy fantasy.. gave me permission to do unicorns and dragons." Around 1980 Boulet began painting images that, she felt, tapped into the collective human unconscious--images of goddesses and shamans that married the forms of animal and human into a coherent whole She drew inspiration from mythology and poetry, Jungian psychology, and worldwide spiritual traditions, as well as her deep love of animals and the natural world. Susan Seddon Boulet died in her home in Oakland, California, on April 28, 1997, after a long struggle with cancer. Her paintings are held in collections worldwide.